View source
watch 02:07
Spider-Man: No Way Home Trailer Dropped - The Loop
Do you like this video?
Play Sound

Bradley G. Belcher is a minor character on Henry Danger. He was Ray's longtime friend who was accidentally turned invisible and has seeked revenge for his transparency.

Wanting to be a sidekick to Captain Man, he tried everything to get rid of Kid Danger just to be his partner in crime.

To settle the feud once and for all, the heroes agree to help Brad become visible again. He regains his physical appearance and he no longer holds any grudges against either hero.

Brad Belcher was once an average person in Swellview who could be seen by anyone. At some point, he met Ray Manchester, and the two became great friends. Because of his history with Ray, he also knows he is the superhero Captain Man and may also know his ex-sidekick Drex. According to Brad's words, before he turned invisible, he was a handsome looking man and neatly groomed. After being invisible for 15 years he could not see what he looked like in a mirror, and when he was visible once more, his appearance changed to that of a man with long, unkempt black hair, wearing a gray sleeveless t-shirt, boxers (no pants), and he appeared chubby.

His characteristics may be partially based on Dr. Griffin the "Invisible Man", because after becoming invisible, Brad would show signs of revenge and frustration and did so when he would try to get rid of those who stood in his way.

In an attempt to become visible again, he asks for Captain Man and Kid Danger's help in restoring him to his former self. Having been ridiculed by Brad, Ray is initially reluctant to help him, not forgetting he trapped him in a coffin with Henry. Ray eventually agrees, and in return, Brad helps the duo catch a thief.

In Invisible Brad, Brad turned invisible when Captain Man dodged a shot that could turn anybody invisible. It hit him, and he wanted something in return. He wanted to be Captain Man's sidekick, but the job was already occupied by Henry. He sabotaged Henry to become his sidekick. When Charlotte came up with a plan to get revenge, the plan went south when Ray told her and Henry that Brad was hit by a bus when they were going out for a walk after getting a few root beers and taking a selfie.

In Grave Danger, it is revealed he faked his death by first and made Ray behave weird. Then, Henry, Charlotte and Schwoz find out that a chair is moving from two days ago via camera. Charlotte gives a theory that Brad is alive so Kid Danger and Captain Man go to the Swellview Cemetery and dig up his grave and he's right behind them. Brad buries them and goes to the Man Cave and uses Ray's gum ball tube to transform into Captain Man but he goes by "Captain Brad". Henry and Ray come down the tubes and Ray starts chasing Brad but Henry uses bear spray in his eyes.

Due to being invisible, he is likely in a detainment cell somewhere in the Man Cave as the Swellview Police would have difficulty believing an invisible man caused crimes let alone finding him.

Brad returns in Visible Brad, hoping to reappear as a physical presence once again. He is in the Man Cave talking to Henry, Ray, Charlotte, Schwoz, and Piper. After settling a deal with the heroes. He agrees to help the heroes if they make him visible again. They agree and Brad helps Henry levitate a book, and Tatiana allows them inside. however Brad didn't lift anything and before Stu threw a card at Henry Brad came in just in time and defeated Stu. Schwoz later turned Brad visible and once he was visible he was excited to see himself in 15 years but realized he didn't brush his teeth, comb his hair, work out or anything. He later went into Schwoz's shower to cry.

The Adventures of Kid Danger 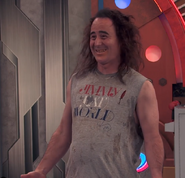