Brawl in the Hall is the second episode of the fourth season of Henry Danger. It premiered on November 4, 2017 to an audience of 1.68 million viewers.

Henry and Charlotte are waiting for Piper to come drive them to Junk-N-Stuff for work. Piper arrives, and Jasper gets out of detention, because he wore a belly shirt that violated the school's dress code. Piper walks into the school, annoyed at how long they're taking. Jasper tells them about how Bysh Bilsky was in detention with him. Bysh had recently been released from prison, and Henry, Charlotte, and Jasper start laughing about the time she put a scorpion in Ms. Shapen's purse. Bysh shows up and believes that Charlotte is laughing at her. Bysh starts threatening Charlotte and blows a raspberry in Henry's face. Henry is angered, and starts chewing his Kid Danger gum behind a wall. Jasper stops him, and they see that Bysh has thrown Charlotte in a trash can. Henry and Jasper get her out. Ms. Shapen shows up and asks what's happening, and Piper chimes in, saying that Charlotte and Bysh would be having a fight in school. Ms. Shapen says that if they would have their fight, it would need to be at 7:30 on Monday morning.

At the Man Cave, Ray has found out about the fight, as it was on the news. He invited three fighters to help Charlotte train for her fight. Charlotte begins to learn a little about fighting, being able to successfully hit Henry and Schwoz. However, Ray tells her to go up against her trainers, but she loses to all of them. Charlotte decides to go home, and she tells Henry and Ray not to help her with the fight, as she wanted to settle this on her own. Ray and Henry agree, but once she leaves, they decide that they will help her anyway.

Piper charges $10 admission for the fight, and Jasper goes up to Bysh to try and convince her not to fight Charlotte. He convinces her to come into the janitor closet, where Bysh ties him up and hangs his body from the ceiling. She exits, and Charlotte shows up. She walks into the janitor closet and gets freaked out by Jasper. Bysh enters the closet, ready to fight her. However, Charlotte asks her who hurt her. She doesn't want to tell her, but Charlotte persists. Bysh finally admits that when she was twelve, she knocked out her front tooth, and got made fun of by her cousin Sharice and her friends. Bysh then decided that she couldn't trust anyone if she couldn't trust her best friend. Charlotte tells her that she wanted to be her friend, and they hug. They exit the closet and announced the school that the fight is cancelled. Piper walks out the school with all the students' cash. Kid Danger and Captain Man show up with police officers. They say that the Swellview Bank was robbed and the money was in Locker 53, which was Bysh's locker. Charlotte interrogates them, and they say that last night, they robbed the Swellview Bank so that they could get a big sack of money and sneak it in Bysh's locker, so that she could get arrested and not fight Charlotte. Charlotte is furious, saying that she had already befriended Bysh and she told them not to help. The money is found in her locker, and the officers arrest Bysh. Charlotte yells out after her that she would meet her in the police station. 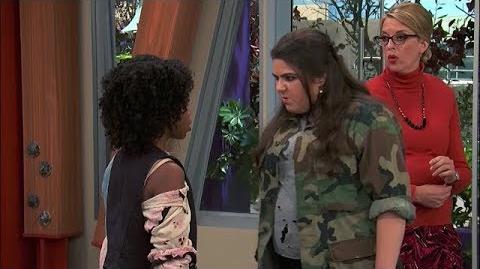 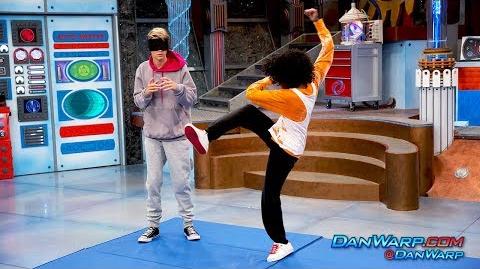