Captain Jerk is the twenty-second episode of the first season of Henry Danger. It premiered on April 11, 2015 to an audience of 1.92 million viewers.[1]

Henry, Piper, and Kris are eating sushi pizza, and then, Jake comes home and says that a news reporter asked him a question about Swellview's ban on plastic bags. He shows them the news report and when she asked him the question, Jake just stuttered and wouldn't stop saying "such as." After this, a story comes on about a video where Captain Man asked two kids for a cup of lemonade, and when they said it was one dollar, Captain Man ripped out a mailbox and smashed their lemonade stand. Right then, Ray alerts Henry and he and Charlotte go to the Man Cave. Henry and Charlotte asks Ray why he smashed the lemonade stand. He explains that it wasn't because the lemonade was a dollar. It was because he saw a deadly spider on the stand and he was trying to kill it before it could attack the kids. Now, everyone hated Captain Man. Charlotte suggests that Ray apologize.

Captain Man releases a public video apologizing and saying why he did it. However, everyone believes he's lying and he only made that video to make people think he's sorry. Later, Charlotte comes up with an idea. Everyone wanted to know where Captain Man lived and worked. They could have a contest and the winners would win a trip to the Man Cave. They also didn't have to know where it was, because Gooch could send them down the tubes in sacks. In order to win, someone would have to guess four correct numbers and the first three people who got it correct can have a tour of the Man Cave and bring one guest. They would have to go on GuessThatNumber.com. Everyone begins trying to find the numbers. Two people have found it, and Henry is nervous that Jasper will be the one to guess the numbers, since he's been in his basement for four days. If Jasper won, he might find out that he was Kid Danger. Also, Piper has hired a bunch of kids to guess the number correctly. Then, a boy gets the numbers correct and Piper takes the credit.

Ray begins to get his popularity back and everyone forgets what he did to the lemonade stand. However, Henry tells Ray they have to cancel the VIP tour thing, because Piper was one of the winners. However, Ray says that Schwoz can disguise his face with a face mask and his voice by pressing an invention to his throat that made his voice sound completely different. Jasper begs Piper to let him be her guest. Piper says yes, only if Jasper would wear anything she told him to wear. Schwoz disguises Henry and makes his voice extremely deep. Charlotte and Schwoz then go to pick up Schwoz's sister, Winnie, from the airport. Schwoz's sister looked like a horse, and Henry and Captain Man start laughing at her. In the car, Schwoz tells Charlotte that if a cop pulled them over, she had to switch seats him very quickly because he wasn't legally allowed to drive. This was because he couldn't see at night. Jasper, Piper, and the other two winners arrive. Piper had made Jasper wear a female costume. Jasper and Piper realize that Kid Danger's voice and face was different and Henry claims that he went through puberty. One of the guests, named Mr. Yoshda, had bought his wife and doesn't really care about Captain Man. The other guest is named Dennis and he had come alone. Mr. Yoshda and his wife begins to watch an episode of iCarly. Captain Man then lets everyone break a chair on him and he then shows them their weapons. He and Henry show Jasper, Piper, and Dennis a weapon disguised as a hot dog which they called the "Covert Wiener." They explain that it was used to look like a regular hot dog, but if a bad guy ever appeared, the hot dog could shoot the bad guy and kill him. Dennis then takes the Covert Wiener and grabs Jasper. He says that if anyone tried to stop him, he would kill Jasper and Dennis asks for the fastest way out. Henry and Captain Man say the fastest way out was the tube. If he went under it, the tube would go over him and he just had to yell "Up the tube!" and he would be out. Dennis does this, but then, Captain Man makes the tubes override. They double the power and they send Dennis back down painfully. They send him back up, then back down. They put the tube up and Dennis falls to the floor. They send the tube back down and it hits Dennis on the head. Henry grabs the Covert Wiener and Captain Man sends the tube up and down three times, hitting Dennis and he falls unconscious. 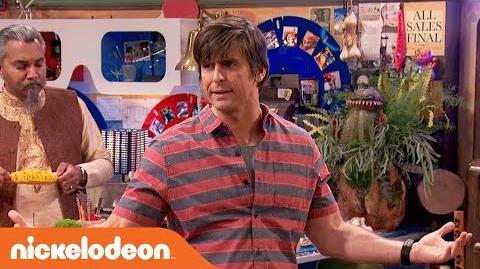