Elevator Kiss is the eighteenth episode of the first season of Henry Danger. It premiered on March 7, 2015 to an audience of 1.65 million viewers.[1]

Henry gets a janitor to fix the lock on his locker so that he could share it with Bianca. Bianca is happy about this. Then, Charlotte comes and asks if it is true. Henry says he is. The janitor fixes it, and now Bianca can open Henry's locker, too. Oliver gives Henry a bag of Skeez-Its, and has Henry step on it. Everyone applauds, but then, Jasper arrives and tells Henry that when he asked if he could share his locker with Henry, Henry had said he wasn't ready. Henry says it was because Bianca was a girl. They leave, and Charlotte lets Jasper eat the bag of Skeez-Its Henry stomped on.

Ray and Charlotte are in the Man Cave. They have two emergencies, and couldn't get any help because the fire department and the police were playing softball against each other. The first emergency was that there was an alligator loose in Swellview Park and the second was that there was a girl stuck in the elevator on the 79th floor in a building. Henry arrives, and he and Ray transform into Captain Man and Kid Danger. Captain Man takes care of the alligator and Henry goes to the elevator. Kid Danger enters the elevator. He sees that the girl was actually Bianca. As he is in there, the elevator cable snaps and Henry and Bianca are left dangling from the 79th story. Kid Danger and Bianca made out, and then he saves Bianca. Henry is happy, and he tells Ray and Charlotte. Charlotte doesn't think that Henry should be happy, because Bianca had kissed Kid Danger, and she didn't know he was Henry. Henry realizes Bianca was cheating on him.

Henry, Charlotte, Jasper, and Bianca are planning to have a game night, but Henry is furious. During the game, Henry does a bunch of angry moves and is rude to Bianca. Then, Oliver comes in with his great grandmother. After he arrives, Henry quits and Bianca leaves. In the Man Cave, Charlotte suggests to Henry to get evidence that Bianca would completely fall in love with Kid Danger. Kid Danger would have to save Bianca from something. Ray and Schwoz decide to dress up as two teenage thugs (their costumes are unrealistic). Henry is in his Kid Danger costume and then, Ray and Schwoz arrive, pretending to be mean. Ray grabs Bianca's phone and is about to delete some of her contacts, but then, Henry arrives. He zaps Schwoz and he bangs Ray into the lockers. He makes Ray drag Schwoz out of the school. Kid Danger and Bianca are about to kiss again, but Bianca refuses. She says it was because she was in love with Henry. Kid Danger understands and he tells Bianca that she should make Henry a pie. Bianca makes Henry, Charlotte, Oliver, Piper, and Jasper pie and they have another game night and then Henry and Bianca kiss. 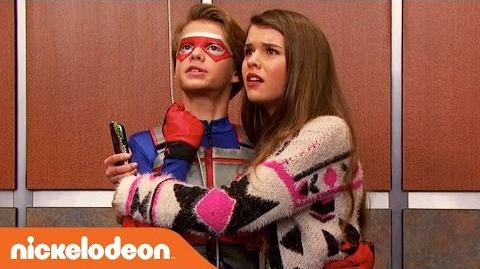