Henry's Birthday is the first episode of the fifth season of Henry Danger. It premiered on November 3, 2018 to an audience of 1.11 million viewers.

At the Hart house, Henry walks down the stairs, happy that it's his birthday. Henry falls on the stairs, and he says that he thinks the stairs are broken. Piper told him that Jake broke them while chasing a racoon, which is currently in the fridge. Kris says that Animal Control will be getting the racoon, but it might take awhile since they love brunch. Henry asks if he can open his presents, but Kris says that he can't open them until Jake gets home. Henry asks when he's coming back and where he is, and Kris says that he's picking up Henry's cake and getting tested for rabies. Jasper and Charlotte arrive, and Jasper tells Henry to hold his present, but it hits Piper. Jasper asks if he smells a racoon, and Kris, Piper, and Henry tell him that there is a racoon in the fridge. Jake arrives, and says that he got the cake and didn't get rabies. They decide to start eating the cake before it melts. However, when they starts singing happy birthday to Henry, his watch beeps. He makes up an excuse that he's always wanted a surprise party, so he says he's gonna go outside for awhile, and then they'll all yell surprise. Ray says that there's an emergency at the blood bank, but Henry says that he wants to have the day off since it's his birthday. Ray says that crime doesn't take birthdays off, neither do superheroes and their sidekicks. Inside the Hart house, Charlotte says that she got a text from Henry, and it says that he won't be back for awhile. Piper and Kris ask why he has to go, and Jasper says that the text says "I gotta go, make up excuse. To avoid Henry's secret being revealed, Charlotte tells them that it's not "make up excuse", it's "makeup excuse", and that he has to excuse himself to buy some makeup.

At the Blood Bank, Jeff is trying to open the refrigerator, when Captain Man and Kid Danger arrive. Captain Man asks Jeff why he would want to rob a blood bank and Jeff says it's because banks have money. Eventually, Kid Danger starts zapping Jeff. Kid Danger tells Captain Man that he's sorry, and he just wants to be at his birthday party. Captain Man says that he can go to his birthday party now. Captain Man finds out that the birthday cake that he's having is a Diez Leches Cake, so he decides to come with him. At the Hart House, Jasper says he doesn't know how long he can keep the cake from melting. Henry and Ray arrive, and Kris asks Henry how the makeup store was, but Henry doesn't know what she's talking about, but then Charlotte and Jasper tell him that he went to the makeup store, and he sent them a text about the makeup excuse. Jake asks what he bought, and Henry says that he bought makeup. Piper asks where it is, and Henry says that he saw an ugly person on the street, and he gave him all his makeup since he was so ugly. Piper asks if Ray was also at the makeup store, but Ray says he was at the gym. But when they start singing happy birthday to Henry, the exact same thing that happened the last time they were about to sing happy birthday to him happens. Ray says that it's an emergency call and they gotta go. Kris asks what emergency call means, and Jasper asks if they mean the fireworks. Ray says that it is, and it's the private fireworks that only he and Henry can watch. They get a call from Schwoz, and he says that they forgot to take Jeff to jail, and now he's robbing the same blood bank again. Ray tells Henry that he'll go deal with Jeff, and he'll stay here. Henry says to please go deal with Jeff, but Ray says that if he goes to the blood bank and deal with Jeff, Henry's family is gonna sing him Happy Birthday, and that the cake will be gone by the time he gets back, and then he won't get any cake. But if Henry deals with Jeff, then everyone will wait until he returns to sing happy birthday, and then they'll both get cake. Henry decides to go deal with Jeff, and he tells Ray not to eat the cake until he gets back.

At the Blood Bank, Jeff is trying to steal the air conditioning unit, when Kid Danger arrives. Then, he gets a call from Schwoz, and he asks if everything's ok. Henry asks that since he just zapped Jeff, if he could come here and wait until the cops show up. Schwoz says he can't, since he's at a birthday party, and it turns out that he's at Henry's party. At the Hart's house, someone from Animal Control arrives to pick up the racoon. She realizes that it's a Diez Lechez Cake, and then Jasper says he doesn't know how much longer this cake's gonna last. So everyone decides to eat the cake, and the chant the word cake. However, Kris is against the idea. The Animal Control lady says that they should call him and sing him happy birthday over PearFace, so they decide to do that. Back at the blood bank, Kid Danger gets a call from his family, so he transforms back into Henry. Kris tells him that they’re gonna sing happy birthday to him over the phone. But when they start doing it, the cops arrive, so Henry shuts the door until the call is over. At the Hart House, everyone is eating the cake. Ray is about to eat the last slice, but Jasper stops him, saying that they have to save it for Henry, so he makes a threat that if anyone tries to get the slice, he's gonna let the racoon out. Eventually, he lets the racoon out, but it lands on him instead of Ray, and everyone runs out of the room. Unfortunately, that's the moment Henry arrives, and he spots the raccoon eating some of the cake, so he joins him in eating the cake. 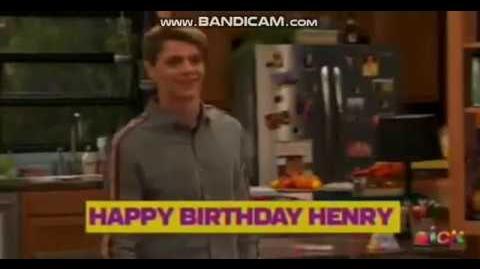 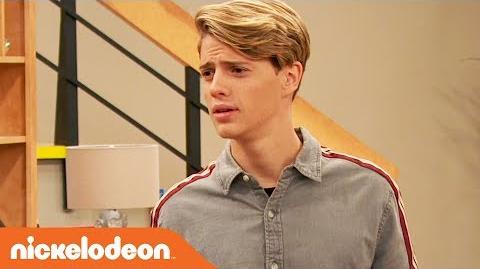