Henry & the Bad Girl, Part 1 is the first part of the two-part special episode. It is the twenty-fourth episode of the first season of Henry Danger. It premiered on May 2, 2015 to an audience of 1.44 million viewers.

Note: Bold indicates the hour long version in the summary.

Henry and Charlotte are studying biology, and then, Henry begins to watch a reality show called “Celebrities in Elevators Talking About Breakfast” and there was now a clip of Kanye West and Kim Kardashian talking about their breakfast in an elevator. Then, Jasper arrives and he says that a graffiti gang called the Wall Dogs had vandalized the Swellview Library. But now, the police were offering a $10,000 reward for who caught the Wall Dogs. Jasper says he needed the money to get foot reduction surgery, as he had giant feet. He says that they should go and form a team to catch the Wall Dogs.

Ray is looking at the vandalism that the Wall Dogs had made and he is furious. Henry and Charlotte show up to work one minute late and this angers Ray. Henry and Charlotte ask why he is so mad and he explains that 30 years ago, before he was indestructible, he was playing in his yard when graffiti artists vandalized his playhouse. Ray had never forgotten this. Ray then tells Henry and Charlotte that they have to track down the leader of the gang. At the Man Cave, Henry, Ray and Charlotte watch a video on Van Del, who is the leader of the Wall Dogs. Henry then says that he has a mother and a lazy editor. Schwoz then arrives covered in a little bit of blood. He says he got beat up. He then says that the Wall Dogs will be striking at a golf course called Big Putts on Saturday night. Ray then asks who did this. Schwoz says that his ex-girlfriend, Heather, slapped him but he then says he got her back by stealing Heather's prosthetic leg. Henry then says that Schwoz has a deep pocket. Jasper invites Sidney to be in his Wall Dogs posse and then, Oliver and his cousin, Krisha, arrive. Then, Piper arrives and throws them out. However, when Jasper mentions the $10,000 reward, she brings them back in. She makes herself the leader of the posse. Kid Danger and Captain Man are looking for the Wall Dogs at Big Putts while hiding in the bushes. At one point, Captain Man goes to the bathroom and then, the Wall Dogs arrive. They are about to begin vandalizing, and Henry tries to stop them. But then, they run around him. Henry is able to catch one of the Wall Dogs, and when he takes off their mask, he finds out that she was a girl. Henry insults her, and she begins crying. Henry starts apologizing, but then, the girl grabs Henry and handcuffs him between two ball cleaning machines. She kisses him and tells him to meet her on the Swellview sign tomorrow, alone. Captain Man then returns.

At the Man Cave, Ray isn’t happy with Henry, as he let the Wall Dogs escape. Henry says he caught one of them, and she escaped too. Ray feels Henry’s lips and sees that it was sticky and it smelled like strawberries. Henry says that she kissed him. Charlotte picks the lock and frees Henry. Henry apologizes. Ray asks if he knew anything about her. Henry thinks back to when she said to meet her on the Swellview sign, alone, but he lies and said he didn’t know anything. Later, Jasper runs into the house, after trying to catch the Wall Dogs. Sidney was already there. Then, Krisha arrives with a painter. She believed that he was a Wall Dog, but he was just hired to paint a garage. The painter leaves. Jasper explains that a mean cat chased him into the Jandy River and Sidney says he was in Swellview Park and a snake bit his hand. Oliver then arrives and he says he was trying on Henry's clothes in Henry's room. Piper is mad at all of them and she kicks them out so they can continue looking. Henry arrives at the Swellview sign that night. The girl arrives and kisses Henry again. She says she is Veronika and is about to vandalize the sign, but Henry stops her. He says that it was illegal, but Veronika says that just because it was illegal, didn’t mean it was wrong. Henry thinks it does and they kiss, but then, Captain Man arrives. He had followed Henry and had called the cops. The cops arrive in a police helicopter. Captain Man is about to arrest Veronika, but Henry and Captain Man fight and Henry ends up pushing him off the mountain. Henry zaps the police helicopter’s light, destroying it and says that being bad felt good. Veronika takes his hand and they run off. 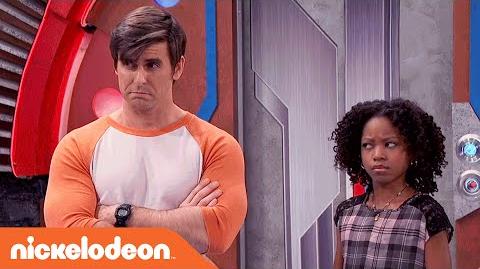