Invisible Brad is the twelfth episode of the first season of Henry Danger. It premiered on January 10, 2015 to an audience of 1.82 million viewers.[1]

Jasper comes to Henry's house and says that he has done 4 sit-ups every day for the past 250 days, so he had done 1,000 sit-ups. He tells Henry to punch him in the gut, but when he does, Jasper ends up falling on the ground and decides to stay there. Then, Piper comes and gives Henry grilled cheese and Skeez-its. Jasper tells Henry to not trust her and then, Henry finds out that Piper was bribing Henry to give her his Yo Pro camera. Charlotte comes and they go to Junk-N-Stuff. Jasper suggests to Piper that she get her own Yo Pro camera, but she didn't have enough money to get one, Jasper suggests that she sell something valuable and in return, Jasper would get half of what they got.

Henry tells Charlotte that lately, Ray has been talking by himself when no one was around. Then, Ray comes in, talking to no one. Ray explains that he was talking to someone named Brad, who is invisible. Henry and Charlotte don't believe him, but Charlotte tells Brad to slap Henry in the face, but when he does, they begin to believe that he's real. Jasper looks at Piper's playhouse, but it turns out that there is a rabbit in there. Henry, Charlotte, Ray, and Brad have lunch. Brad explains that he was invisible because of Ray. Ray explains that a villain was shooting at him with an invisibility blaster, but he missed and hit Brad. Brad blames Ray for this, and says that in return, he wanted the job as Captain Man's sidekick. Ray refuses, but Brad convinces him to give him the job if Henry quit. That night, Brad sneaks into Henry's room and turns his bed over, telling him to quit his job.

At school, Ms. Shapen asks Henry for advice because no one was responding to her online dating service, but then, Brad shows and sprays water on Henry's area. He then puts a bucket on Ms. Shapen, spanks her with a mop, and makes it look like Henry did it. Meanwhile, Piper almost sells her playhouse, but she ends up spraying her customers with a hose after they suggest $50. At the Man Cave, Brad shows up and hits Henry's leg with a steel pipe. Later, he tricks Mitch Bilsky into thinking Henry pinched him on the butt and Mitch gives Henry a black eye. Later, Henry puts a turkey leg on his eye. Ray shows up at Henry's house and Brad punches him. Charlotte suggests that they use paint to make him more visible. Piper sprays another customer (who had offered $200) with a hose and when Jasper asks why, Piper says that she wasn't ready to let go of her playhouse yet. Jasper understands and leaves, but then, she sells it to someone for $300. Henry, Charlotte, and Ray make a plan to make Brad visible but Ray tells Henry and Charlotte that during the plan, Brad got hit by a bus and died. 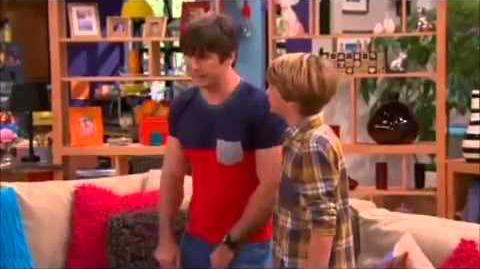