Jasper Danger is the seventh episode of the first season of Henry Danger. It premiered on October 18, 2014 to an audience of 1.62 million viewers.[1]

On Halloween, Jasper has convinced a girl he likes named Monica that he is Kid Danger. He is planning to go Trick-or-Treating with Henry and Charlotte for Halloween. Charlotte dresses up as Macaroni & Cheese and Henry dresses up as a zombie tennis player. Meanwhile, Piper is furious with Jake because he was supposed to get her a Taylor Swift costume, but instead, he got her a Jonathan Swift costume. Jake and Kris go to a party, but this means that Henry is left behind to Trick-or-Treat with Piper. Then, Jasper arrives with Monica, in a Kid Danger costume.

As the gang is about to go to Riverside, Henry’s watch starts beeping. Jasper and Monica go to Riverside, and Henry tells Piper that the beeping watch meant that he had to go to work. Piper refuses to go with him and threatens to tell Kris and Jake, but Henry zaps her with his watch and Henry and Charlotte drag her to Junk-N-Stuff. Meanwhile, Jasper sees a man named Jeff trying to steal a car. Monica expects Jasper to defeat Jeff but then, Jeff realizes that if Jasper was Kid Danger, Captain Man would pay a lot to get his sidekick back. Jeff then captures Jasper and Monica.

When Henry and Charlotte get to Junk-N-Stuff, they get Gooch to watch Piper while they go talk to Ray. When they go downstairs, they see that Ray had dressed up as a cheer-lobster and only triple-beeped Henry so that he could see his costume. Then, they get an alert from Gooch, who shows them Jeff’s video and sees that he had captured them and will give them back for a million dollars, two huge burgers, and fries. Ray recognizes him as a petty criminal whose been put in jail a dozen times. Henry can’t go with him so that Monica could still think Jasper was Kid Danger. Ray goes by himself. Gooch tells Henry and Charlotte to watch Piper because he is going to a Halloween party with his nephew, Benji. At Jeff's apartment, Captain Man kicks down Jeff’s unlocked door and unties Jasper. Jasper punches Jeff as Captain Man shoots him with his laser, so that it would look like Jasper knocked Jeff out. Captain Man tells Jasper that he is too young to be lying to girls and tells him to tell the truth to her that he isn't really Kid Danger. Captain Man takes Jeff to jail. However, instead of telling Monica he’s not Kid Danger, he says that he got a raise. Meanwhile, Piper wakes up, and Charlotte and Henry tell her that she ate some bad candy. However, when Henry gets home with Piper, his sister is suspicious. A kid arrives for Trick-or-Treating and Piper sees that the kid had the same Jonathan Swift costume Piper was wearing. Piper and the kid go to hang out and as Henry goes in, he sees that the kid’s father’s eyes begin to glow green. A mythical black cat appears, and its eyes glow green. 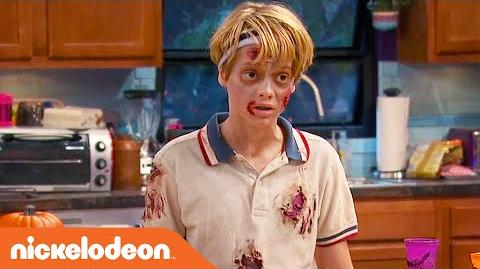 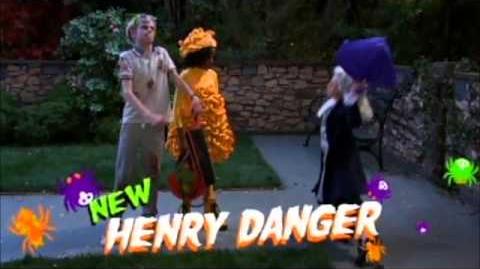