Let's Make a Steal is the fourteenth episode of the first season of Henry Danger. It premiered on January 31, 2015, to an audience of 1.62 million viewers.[1]

Henry walks into Junk-N-Stuff with a box of light bulbs, but then, Charlotte, Ray, and Gooch surprise him, causing him to drop the light bulbs. Ray begins to put makeup on Henry's face, Charlotte works on Henry's hair, and Gooch tries to find him a shirt. Henry asks why, and they tell him that Charlotte found out that winners of a game show called "Spin and Win" were getting their prizes stolen, so Henry would now be a contestant to catch the burglar. Jake calls Henry and asks if he could come home because Jasper was there, Piper hated him, and Kris was at the rodeo. Henry tells him he wouldn't be home until late at night, because he had the game show. Jake and Piper ask if they could come and Henry says yes. Jasper also wants to go, but Jake locks him out and they leave. Jasper then takes Piper's bike and rides after them.

When Jake, Piper, and Jasper are lining up, security tries to take away Piper's "selfie stick", but they begin fighting over it and the stick hits Jasper in the nose. Jasper goes to the hospital, Saint Benard's, with a broken nose. Meanwhile, at "Spin and Win", the host, Rick Richards, shows everyone his son and daughter, Derek and Maddy, who worked on the show and the show began. Henry and his opponent each have 975 points, and the next person to get the question right would have a chance to win. Henry gets it right and will spin a wheel and get the five prizes. Jasper ends up having to get his nose fixed by an inexperienced doctor. After Henry wins, Derek and Maddy begin to hypnotize Henry, but no one notices. When they're done, Henry has to name 10 breeds of dogs in 30 seconds to win the five prizes, Henry gets ten and wins the prizes.

All the prizes are delivered to Henry's house, and Henry, Charlotte, and Ray begin to watch the exits to wait for the burglars. Also, Jasper's doctor gets four chances to fix his nose, but he can't so they call in another doctor, but this one didn't speak English. Dr. Baxter tries to tell her to fix Jasper's nose, but he accidentally tells her to hit Jasper's nose, and his nose hurts even more. Meanwhile, Henry, Charlotte, and Ray see a van pull up on their porch. Henry then gets a video chat from Derek and Maddy, and he accepts. But they begin to hypnotize him again. They get him to put all his prizes in the van. Charlotte and Ray become confused, but Henry doesn't hear them. At one point, he is hypnotized into pulling up Ray's underwear and he delivers the last prize to the van. Ray and Charlotte realize that Henry was being hypnotized into doing this. When Derek and Maddy are done hypnotizing him, Henry returns to normal. Ray pulls up Henry's underwear in revenge. At the "Spin and Win", Henry and Ray, show up in their Kid Danger and Captain Man uniforms. They confront Derek and Maddy, but then, they send three women to fight them. Henry and Captain Man know they can't fight girls, so they decide to just run and avoid getting hurt. But at one point, when the women are fighting the two, Henry accidentally pulls off one of the woman's hair. They realize that the women were actually guys. Derek and Maddy didn't know they were guys, either. Henry and Captain Man fight them and they call the cops on Derek and Maddy. They get their prizes, which included a hot yogurt machine, an electric guitar, a karaoke machine, a motorized skateboard, and a sharkpoon. Jasper, Piper, and Jake finally return, with Jasper's nose fixed. They begin to eat their hot yogurt, when Piper accidentally shoots Jasper in the nose with the sharkpoon. 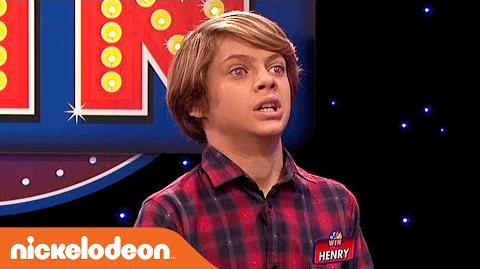 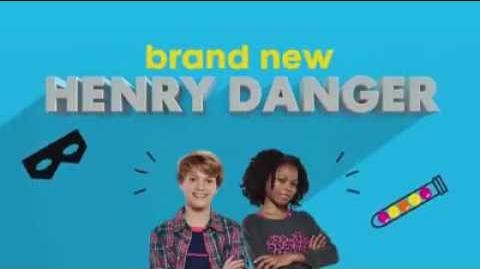