Live & Dangerous, Part 2 is the eighteenth episode of the third season of Henry Danger. It premiered on September 23, 2017 to a audience of 2.22 million viewers.

Jasper shows up at Henry's house to hang out with Charlotte and Piper. Piper gets an alert that Frankini is doing a livestream. She opens it up and they see Captain Man and Kid Danger with Frankini, who was controlling their actions with special electronic underwear called Frankini-Bottoms. Frankini tells his viewers that Captain Man and Kid Danger would be re-enacting a dramatic scene from a movie called A Swim to Forget. Kid Danger and Captain Man do this, with the audience unaware that their actions were being controlled by Frankini using a machine. This leaves Piper, Charlotte, and Jasper confused.

Frankini makes Captain Man and Kid Danger tell their audience that once they reach 10 million viewers, they will take off their masks and reveal their true identities. Piper, Charlotte, and Jasper are all shocked by this, knowing that they would never reveal their identities to the world. Charlotte pulls Jasper to the front porch. She tells Jasper that she'll go to the Man Cave and get help from Schwoz, and tells Jasper to stay with Piper. Jasper goes back to the house, and Piper calls Sidney because he knew how to make fake pimples, and if she livestreamed a huge pimple getting popped, it could take viewers away from Frankie, and they would never get to 10 million viewers. Charlotte enters the Man Cave, where Schwoz was watching the livestream. Charlotte notices something weird with Kid Danger and Captain Man's eyes, and Schwoz sees a machine on the far right of the livestream, which he recognizes as a domitron. A domitron was a machine that could be used to control someone's actions when they were wearing an article of clothing. Oliver and Sidney show up to Piper's house, and they have a bunch of makeup supplies to create a giant zit to attach to Jasper's neck. Frankini has reached nine million viewers, and his assistant, Goomer, alerts Frankini that the number was dropping fast due to another livestream, where Piper was telling her audience to stop watching Frankini because she was going to pop the biggest zit in mankind. Frankini decides to get his audience back, and tells Goomer to get the worms.

Frankini shows his audience a bunch of worms, and puts them in a food processor. He puts the worm mixture on a plate, and serves it to Captain Man and Kid Danger, who are forced to eat it. Schwoz is quickly working on a way to stop the domitron from working. He starts working on a way to shut off the power in Swellview. Frankini hits 10 million viewers, and Jasper and Piper run to the computer. Kid Danger and Captain Man slowly begin to take off their masks, when Schwoz cuts the power. The domitron stops working and Kid Danger and Captain Man regain their ability to move on their own accord. They blow a bubble and this gives them back their regular pants. Charlotte calls and tells him what happened. Jasper then calls and tells them to bring Frankini to their house. Piper livestreams the pimple popping, obtaining over 11 million views, and she pops it. The fake pimple goo then explodes all over Frankini, tied up on the floor. 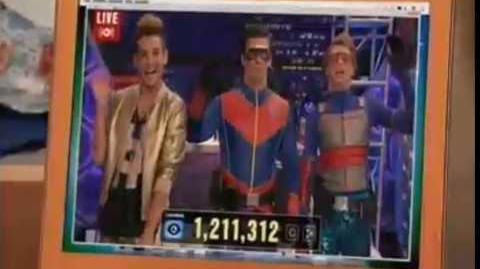