Man of the House

Man of the House is the nineteenth episode in the first season of Henry Danger. It premiered on March 14, 2015 to an audience of 1.76 million viewers.

Henry, Charlotte, and Jasper are making a science project involving an egg. Also, Jake is in Baltimore and he is video-chatting with Piper about his hotel. Piper isn't listening to him. When Jasper is done shaking the egg he puts it on the machine, but the egg explodes on his face. Kris comes in and says that she was walking to the car and a man stole her purse that had her phone, wallet, and Yotally Togurt punch card; she was one yogurt away from a free medium yogurt. Jake hears this, but Piper moves the laptop to the front porch. On the porch, Jake asks if a man can bring him inside, but he rubs the screen with his belly.

Henry goes to Junk-N-Stuff and he is going to look up the thief who stole Kris' purse, but instead, when Ray finds out, he transforms into Captain Man and goes to Henry's house. He interviews Kris about the purse thief. When Henry gets home, he finds Captain Man there. Henry is not very happy about this. Captain Man says that the thief has Kris' driver's license, so he knew where she lived and Captain Man had to stay there to protect Kris. Henry tells Captain Man that if the thief came, he could handle it himself, but Captain Man sits on Henry's head, pretending to be the thief, and asks what Henry would do. Henry makes Captain Man get off of him. The next morning, Henry finds that Captain Man had bought a bunch of stuff for the Harts. He then finds Henry's report card and tells him he got a C+ in Social Studies and he has to get better grades. Henry is going to go to a movie with Charlotte and Jasper, but Captain Man makes Henry stay home and study for a Social Studies test. When Henry refuses, Captain Man sits on his head again.

Captain Man makes the family "Mancakes", which are pancakes with the Captain Man logo on them. Henry is annoyed with Captain Man and he asks what he was going to do about the purse thief. Captain Man says that he would make Kid Danger wear a dress and carry a purse at night so that the thief would target him and that Henry could either stop talking about it or eat some Mancakes. Kris hears that they are making family photos half off and Henry, Piper, Kris, and Captain Man take a family photo. At the Man Cave, Henry arrives in a poncho and rubber boots. Captain Man had made him wear it even though it was barely raining. He did this because Captain Man didn't want Henry to catch a cold. Charlotte then shows something she found online. She had found Kris' purse and the criminal was trying to sell it. He had put in the ad that the purse was stolen, so they knew it was hers. Charlotte says that they should buy the purse and when the thief came to the house, Captain Man would be there and catch the thief and then, he would have no excuse to stay at Henry's house. Henry and Charlotte tell Piper, Kris, and Captain Man. Kris and Captain Man hide and then, the thief shows up. Henry grabs it from him and calls Captain Man. Instead of taking the purse, Captain Man gives it back to the thief and tells him to wait there. He comes back in the house and says he should stay for another month or two. Henry tells Captain Man that he was just trying to be the dad in the family. Captain Man finally agrees and says he wanted to have a family. Charlotte sees that the thief had stolen the purse again. Captain Man makes Charlotte go after him. Jake comes home and he finds the family photo and Charlotte comes in with the thief. At the Man Cave, Captain Man now has the family portrait of Kris, Henry, Piper, and himself. 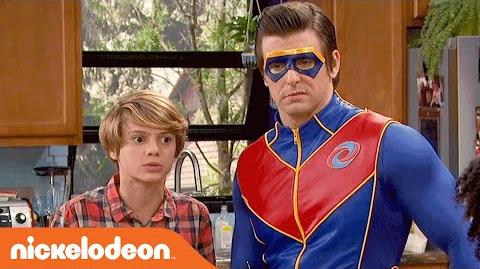 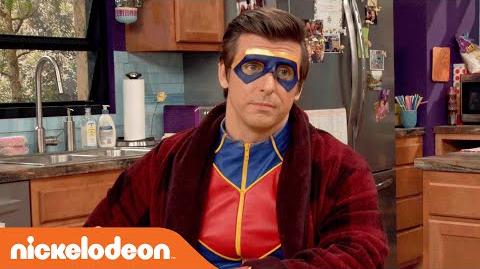