One Henry, Three Girls: Part 2 is the third episode of the second season of Henry Danger. It premiered on September 26, 2015 to an audience of 1.78 million viewers, roughly the same amount for Part 1.

After Chloe arrives at Henry's house, Piper is still mad that Henry broke her glass hat and Charlotte takes away the sledgehammer until she calmed down. Henry is shocked and surprised that she is here. Chloe explains that season 1 of Kids in the Woods wrapped. Piper goes to get her good camera to get a picture of her. Then, Bianca arrives. Henry brings Bianca to the porch and Jasper arrives, saying that Piper wanted Chloe wearing makeup and wanted to know if Bianca had some. Bianca gives Jasper the purse. Henry is about to tell Bianca what he wanted to talk to her about but Jasper comes back and says that Chloe was cold and asks Bianca if Chloe could borrow her jacket. Henry is about to tell Bianca but he is interrupted by Jasper who tells him the jacket fits Chloe perfectly. Henry tells Bianca that he wants to make their relationship official by taking her to the Meat Ball, a meat-themed dance at Swellview Junior High. They update their relationship statuses.

Bianca tells Henry to follow the three-foot rule, which said that Henry had to stay at least three feet away from Chloe at all times. Piper gives Chloe a ceramic bunny and tells her to say on video that you should buy it so that she could sell it online. Henry walks in and Chloe tells Henry that she didn't come back to get back together with him. Chloe explains that she didn't know if Kids in the Woods would be picked up for another season, so she decided to post a message online asking Kid Danger to bring her to the Meat Ball, even though Henry was already taking Bianca to the same dance. This would give her publicity, and help her show get picked up for another season. At the Man Cave, Ray tells Henry to start off the party bringing Chloe to the dance as Kid Danger. Everyone would take pics and post them online, giving Chloe the publicity she needed then he would call Henry as Captain Man saying that he needed him for an emergency. Kid Danger would have to leave the party and then he could change back to Henry and spend the rest of the night with Bianca. Charlotte doesn't think this would work. Henry arrives at the Meat Ball, as Kid Danger with Chloe. Everyone takes pictures, then Ray calls Henry as Captain Man talking about some fake emergency that they needed to solve. Henry is about to leave, but then, Chief Sullivan tells Henry to stay and that he would get every police officer in Swellview to help Captain Man with his emergency, while Bianca is still waiting for Henry to arrive.

Henry drags Charlotte over to talk with her about his problem. Henry decides to pretend to be in a big emergency, and while away, he would change back to his normal self. However, Kid Danger didn't know what Henry was supposed to look like, so Chloe and Bianca try to look with him. Jasper helps get the stuffed cow for Chloe. They are unsuccessful, so Henry locks Chloe and Bianca in a closet and pretends that there is a villain trying to attack Kid Danger. Jasper puts his face in boiled water. Henry runs back to the Meat Ball, and Charlotte tells Henry that if they thought Kid Danger was in a fight with a bad guy, they would use their phones to call Captain Man and he would think there was a real emergency. Charlotte tells him to go to the drama room and get a disguise that would make him look like a bad guy. Henry does this and runs into the closet and yells at Chloe and Bianca to give him their phones. However, Captain Man arrives and begins to take down the "bad guy", wanting to know where Kid Danger was. Henry runs away and reveals who he is. Henry then pretends to be defeated. Captain Man tells Chloe and Bianca that he would spank the bad guy until he told him where Kid Danger was. Then, Henry takes the disguise off. Chloe goes back to the party, and Bianca calls Henry. She hears Henry's phone ringing, and sees him as he walks into the hallway. Bianca asks Henry where he has been, and he tells her that he got there two hours ago, but a 'weird guy wearing a mask and striped pants' jumped him in the parking lot. Bianca tells him that he was the same bad guy had locked her and Chloe in a closet and had just been captured by Captain Man. Henry and Bianca go to the Meat Ball together. Jasper gets the stuffed cow for Chloe and tries to find her. 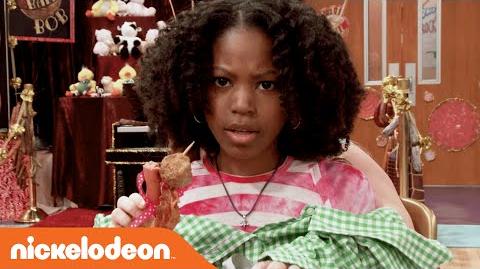