Spoiler Alert is the thirteenth episode of the first season of Henry Danger. It premiered on January 24, 2015 to an audience of 1.63 million viewers.

Henry, Charlotte, and Jasper are watching the second-to-last episode of a show called "Walking Orange." When the episode ends, Charlotte is about to explain something about the series finale, but Henry and Jasper cover her with pillows. Charlotte explains to them that she was just gonna say that after the episode, they would rerun the series premiere. Then, Piper tells them that she needed a cameraman. She was doing a video to join the Man Fans, a club full of Captain Man and Kid Danger fans. The president, Paula Makiato, told Piper to have a video of her eating hair soup to get in. When she eats it, they think it is gross, but Jasper then asks for some.

Henry, Charlotte, Ray, and Schwoz are in the Man Cave waiting to watch the series finale of Walking Orange, but right when it starts, Henry, Charlotte, and Ray get a text. They read it, but the text had a spoiler about what would happen. The text was from a villain named "The Spoiler" and he would find out what would happen in TV shows and movies and he spoiled the ending. Henry, Ray, and Charlotte are furious, but Schwoz had turned his phone off, so he still didn't know what would happen. Gooch alerts them and says that the Spoiler didn't just send it to them; he sent it to everyone in Swellview. They needed to stop the Spoiler. Meanwhile, Piper sends in her video, but Paula still wouldn't let her in. She says that she would only let Piper in the Man Fans if she got a selfie with Captain Man. Later, Henry and Ray find out from Mr. Gooch that the Spoiler would be at the premiere of Galaxy Wars 9 to spoil the ending for everyone. They decide to go there tomorrow night.

Piper tries to make an emergency happen by telling Jasper that Henry dropped his sock out the window and he needed to get it back. Piper ties a rope to Jasper and he does it, but Piper makes a paper bag explode and Jasper ends up dangling out the window. Piper calls the Captain Man emergency hotline and Gooch picks up, but he won't listen to her. Piper complains to Paula that she had tried to get a selfie, but Paula won't listen and says that she would only let her in if she gave her a selfie with Captain Man. Piper begins crying, and Henry sees her. She pretends she wasn't crying. Henry tells her that he heard that Captain Man would be showing up to the Galaxy Wars 9 premiere and Charlotte had an extra ticket. Henry and Captain Man show up, disguised as Duke Starjacker and a Red Skynaut. Charlotte brings Piper to the premiere, and they see Paula. Before they begin the movie, Ray goes to get popcorn. But then, as he is gone, the Spoiler arrives. He is about to tell everyone the ending, but Charlotte tells everyone to cover their ears. Henry leaves and returns as Kid Danger. Henry and the Spoiler fight, and then, Piper arrives and begins beating the Spoiler with a glow bat. Captain Man arrives, and sees her. The Spoiler is arrested, and Paula tries to get Captain Man's attention. But Captain Man tells Paula that Piper had beat the Spoiler half to death and Paula didn't do anything. Captain Man declares Piper the new president of the Man Fans. Paula angrily leaves, and everyone begins to watch Galaxy Wars 9. 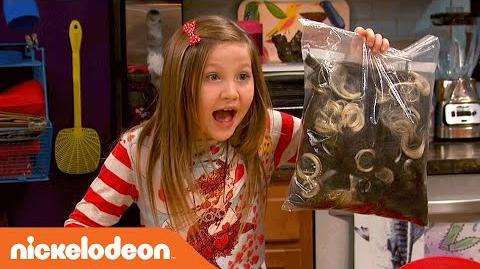