Stuck in Two Holes is the sixteenth episode of the third season of Henry Danger. It premiered on April 29, 2017 to an audience of 1.72 million viewers.

Captain Man and Kid Danger go to a abandoned movie store, Beta Maximus, to find Jeff. However, their lasers do not work because Henry forgot to charge them the night before. They zap Jeff until he falls unconscious. While Henry was trying to pick up a Good Burger tape, he falls through the floor and gets trapped in a hole. Ray then falls into another hole after seeing the Good Burger tape.

Charlotte and Jasper arrive in the Man Cave, and they see Schwoz taking a bean bath. They ask Schwoz if he has seen Henry and Ray. Schwoz says he hasn't seen them since last night. Charlotte tries to call the police but the police officer thinks it's a prank call. Charlotte and Jasper ask Schwoz if he can drive them to the abandoned store. Schwoz refuses because Ray didn't give him a raise. Jake calls Jasper to ask if he has seen Henry. Schwoz uses a voice device, which allows him to speak with Henry's voice. He tells Jake that he spent the night at Jasper's house. Jasper and Charlotte go to Piper's house with a box, knowing that she has a driver's license. She tells them she won't open the box until she finishes her burger, so Jasper takes it and puts it in his pants. Piper opens up the box and finds a bunch of weapons and a letter saying that Captain Man and Kid Danger might be in trouble in the abandoned store and he requires help.

Jeff wakes up, and Captain Man asks him if he can use Henry's phone to call the police. He says no. Jasper, Charlotte, and Piper then arrive at the abandoned store, armed with Captain Man's weapons. Jasper blasts himself by accident. Charlotte and Piper team up to hit Jeff. Jeff is able to get their weapons, and Charlotte and Piper instead throw DVDs at Jeff's head until he falls unconscious. Captain Man tells the gang to call the police before he pees his pants. Kid Danger tells the gang to call saying that he is dying of hunger. Jasper gives Kid Danger the burger he left in his pants, and Kid Danger hesitantly eats it. 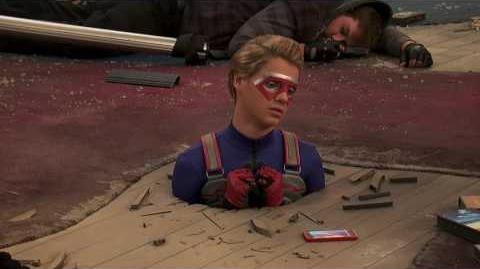 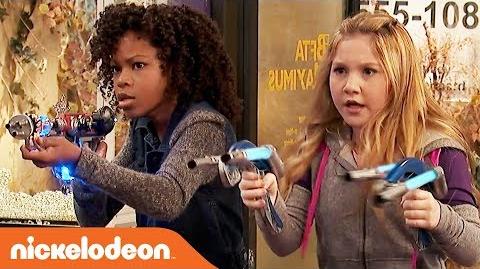 Charlotte & Piper to The Rescue! 💪 The Charlotte and Piper Show Henry Danger Nick
Community content is available under CC-BY-SA unless otherwise noted.
Advertisement