Substitute Teacher is the sixth episode of the first season of Henry Danger. It premiered on October 4, 2014 to an audience of 1.79 million viewers.[1]

Henry and Charlotte are at school. Charlotte can't get her locker open, so she gets everyone away from her locker, while Henry zaps her lock with the watch Captain Man gave him. Then, Piper comes to his school and asks Henry where her phone is. Henry sees that he had accidentally took her phone, but he had accidentally butt-dialed Jana Tetrazzini, who Piper hates, but keeps her phone number on her phone so that if she ever calls Piper, she'll know who it is so that she can ignore it. She storms out of the school and then, Jasper arrives with a new student called Ortho. Ortho asks them about the school's water supply and if they have any security cameras. Ortho then sees Jasper's Captain Man poster and he says that soon, his father would be taking care of Captain Man and they were in the planning phase. Henry and Charlotte become suspicious.

Later, they go to the Man Cave and tell Ray about Ortho. When Ray asks them about what Ortho looks like, Henry remembers that Jasper had posted a picture of himself and Ortho online. They find the pic. Ray begins to think that he was the son of Drill Finger. He explains that 3 years ago, he had captured a villain called Drill Finger and put him in jail, but he was released three weeks ago. He alerts Gooch, but Gooch says that his nephew, Benji, had the chicken pox. Ray asks him what Drill Finger's last words were right before he was arrested. Mr. Gooch says that he had said he would take care of Captain Man when he got out, which Ortho said his dad would do. Ray decides to go undercover to see Ortho, and he gets an idea. Later, at school, Henry's History teacher, Ms. Shapen, arrives and when nobody's looking, they begin to rub Ms. Shapen with Benji, who had the chicken pox. When they go to their history class, Jasper announces to everyone that Ms. Shapen had the chicken pox and they were getting a substitute. Ray comes in, with a ridiculous costume and a fake accent. He claims that his name was "Mr. Gelding" and he would be their substitute.

Later, Henry takes Ray out to the hall and asks him what he was doing here. Ray says that he was spying on Ortho, so that they could find out what he and his father was planning. When they go back to class, Ray has everyone tell him about evil people in their past, and he asks Ortho directly. He also says that the next day would be "Bring Your Father to Class Day" for Ortho. The next day, Ortho's father arrives. Ray quickly zaps him. Ortho goes to call his mom, but Henry zaps him with his watch. They act like this is a tragic medical episode, and they take them out of the room. In the Man Cave, Henry and Captain Man begin to question Ortho and his father. But then, Gooch alerts them, saying that Drill Finger was found in Nebraska, putting a bunch of sugar in the water supply. Nebraska wasn't near Swellview, and then, Henry, Captain Man, and Charlotte realize that Ortho asked about the water supply because his uncle helped with the water supply, he asked about the security cameras, because at his old school, he had been caught picking his nose by the security cameras, and that the way Ortho's dad would be "taking care" of Captain Man would be by building a retirement home to enter Captain Man into when he retired, and that the "planning phase" part was actually about the retirement home. Ortho and his dad then say there are gonna call the police. Captain Man zaps them unconscious, brings them to a dark alley, and removes their memory. They quickly run for it, as Ortho and his dad wake up not remembering anything including who they are or where they live. 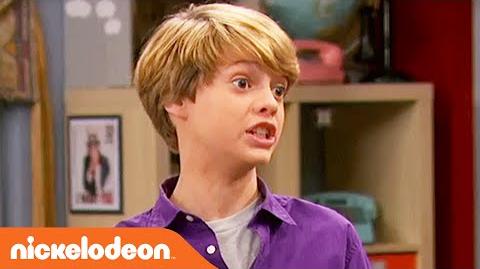