Super Volcano is the fifteenth episode of the first season of Henry Danger. It premiered on February 7, 2015 to an audience of 1.62 million viewers.[1]

Oliver is selling fruit bars at school. He gives one to Charlotte, and then, Jasper shows Henry and Charlotte the new bucket he got from Bucket Hut. When he is about to start telling them about how special it is, Charlotte pretends to start talking to someone on the phone (pretending the fruit bar was her phone). Henry stays and Jasper shows Henry that the bucket was magnetic. Then, a girl named Bianca who Henry likes arrives. Chloe (Henry's old girlfriend) would be gone for several months because she was on a reality show named “Kids in the Woods.” Henry tries to talk to her, but when he goes up to her, he ends up just staring at her. At the Man Cave, Ray, Charlotte, and Schwoz reveal to Henry that there was a volcano 50 miles below the Earth’s surface and just below Swellview. In less than two days, the volcano would erupt and the world would end. Henry is about to tell all his relatives, but Ray stops him and tells him that it's best that no one knows. Charlotte then goes to the Snack Machine and gets a gallon of ice cream.

Piper is throwing away gluten foods, and when Kris gets home, she asks Piper why she is throwing away their foods with gluten. Piper says that it’s because she is gluten-intolerant. When Kris asks where she found out, Piper says that everyone in her class was gluten-intolerant, and so were popular kids and celebrities. Jake decides to ask her doctor if she was gluten-free. Kris and Jake are about to leave, but Henry suggests to them that they should stay together and talk because one day, they might not be together, but they refuse. After dinner, Henry begins looking at the stars. Jasper shows up. Henry tells Jasper that he loved him, but then, when Jasper is about to show Henry some pictures of buckets, Henry yells at him, saying that no one cares about his buckets. Jasper is confused about Henry’s behavior and then, Charlotte comes with a huge bag of Inside-Out Burger Chili Cheeseburgers. They all begin to eat, but Jasper notices that they had pickles on them. Henry and Charlotte didn’t like pickles, but they say that they would give pickles a chance, but it turns out to be gross. At school, Oliver offers Mitch Bilsky a fruit bar, but Mitch begins bullying Oliver. Henry and Charlotte see him, and Henry decides to stand up for Oliver, because he didn’t fear anyone anymore. He is about to fight Mitch, but Charlotte tells Mitch that a teacher would come in five seconds and Mitch tells Henry that they would fight on Monday behind the synagogue.

Oliver asks Henry if he would go ice fishing with him that weekend, but Henry says yes, since the world would be ending anyway. Charlotte prompts Henry to tell Bianca how he feels about her. Henry sees Bianca, tells her, and kisses her. At the doctor’s, Piper turns out to not be gluten-intolerant. The doctor explains to her that Piper loved spaghetti, and spaghetti had a lot of gluten. Piper becomes angry that her social life is over and leaves. Later at the Man Cave, Schwoz arrives and tells them that he just got a gym membership. Henry asks Schwoz why he would get a gym membership if the world would be ending, but Schwoz tells them that he sent them a text saying was wrong about the world ending. The volcano wouldn’t be erupting tomorrow; it would be erupting in 17 million years. Henry, Charlotte, and Ray become really happy and start dancing. At school, Henry apologizes to Jasper and gives him a bucket. Then, Mitch arrives and says that he can’t fight him on Monday because he was getting his teeth whitened. But he says that all the teachers were now in the auditorium having a meeting, so they would fight now. Henry goes to stretch, and when he does, he tells Charlotte to zap Mitch with his laser. When Mitch is about to hurt Henry, Charlotte (reluctantly) zaps him and he falls unconscious. Bianca then asks Henry for plans this weekend, but Oliver tells Bianca that Henry had to go ice fishing with him. He rents Henry and himself a tandem jacket (a coat for two people) and they end up going ice fishing. 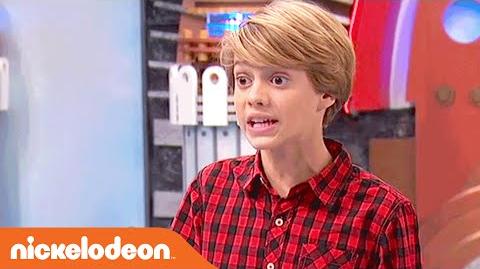