Text, Lies & Video is the twelfth episode of the second season of Henry Danger. It premiered on April 9, 2016 to an audience of 1.65 million viewers.

Henry sells a woman a fake head and closes Junk-N-Stuff. Henry asks Charlotte if she could take the video, but Charlotte repeatedly refuses. They go downstairs to the Man Cave, arguing. Charlotte explains to Ray that Henry wanted her to take a video of him transforming into Kid Danger to see what it would look like. Charlotte wanted Ray to say no to this because the video could get out, but on the contrary, Ray agrees and says that he and Henry should transform together on video. Henry gives Charlotte his phone and he then gets a text from Piper telling him to send the picture in which she looked better than Marla. Charlotte ignores the text and takes the video of Henry and Ray transforming. Henry gets another text from Piper telling him the same thing, so Henry sends her the picture. However, he then realizes that he sent her the video of them transforming and if she watched the video, she would know that he was Kid Danger.

Henry quickly calls Piper but instead, Jasper calls him. Jasper says that he was there because he wanted to go over chemistry homework but Henry quickly asks where Piper was. Jasper says that Piper was upstairs taking a shower. He asks her where Piper's phone was and Jasper looks at it. He sees that the phone was charging next to Kris' phone. Jasper then tells Henry that the video he had sent Piper was sent after Piper went to shower, meaning she hadn't seen it yet. Henry tells Jasper that if he cared about him, to bring the phone to Junk-N-Stuff. Jasper agrees but as he is about to leave with her phone, Piper arrives. She sees Jasper with her phone. Jasper throws water in her face and quickly grabs the phone and runs away. Piper runs after him, furious. Henry, Charlotte, and Ray are waiting for him at Junk-N-Stuff. Jasper finally arrives, with Piper running after him. Piper then sees that the phone was not hers; it was Kris'. That meant her phone was still at their house. Henry runs to the house, and Piper runs after him.

Henry gets to the house and gets her phone. He goes to delete the video, but he doesn't know her passcode. Piper runs in and Henry quickly drops her phone in the sink and turns on the garbage disposal to destroy her phone. Piper is angry with him and tells Jake what he did. Jake doesn't believe Piper because Henry was the "good child". Jake then gives Piper a new Pear Phone because her birthday was next week. Piper hadn't backed up anything on her phone for a month, meaning the video would not be on her phone, but Jake tells Piper that Kris had made it so that her phone would back things up automatically, including the video Henry sent. She begins to back her phone up, and then, Jasper arrives to returns Kris' phone. While her phone was being backed up, Henry begins to mix a bunch of random things together in the kitchen to make "soup". He then ties her ankle to the chair without her notice. Once the phone finishes backing up, Henry pours cereal on her and grabs her phone. Piper tries to chase him, but sees that her ankle was tied to the chair. She chases him with the chair attached to her ankle. Henry then deletes the video off her phone, but he didn't know how to delete it off of the cloud. He goes back to Junk-N-Stuff and has Charlotte delete the video off the cloud. Piper arrives and Charlotte gives her the phone back. Piper storms out and Charlotte tells them to delete the video off Henry's phone. However, Henry and Ray want to watch the video to see what it looked like. When they watch it, they find that Charlotte had taken the video of herself and had the phone's camera facing herself, meaning that it was all a waste of time. 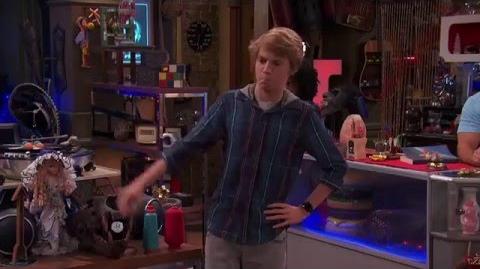 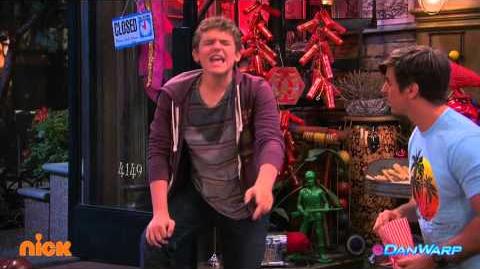 Jasper VS. Piper
Community content is available under CC-BY-SA unless otherwise noted.
Advertisement