The Beat Goes On

The Beat Goes On is the first episode of the second season of Henry Danger. It premiered on September 12, 2015 to an audience of 2.13 million viewers.

Schwoz has a bunch of fan mail for Kid Danger and Captain Man. Ray finds Schwoz's mutated egg and says he wants it off the Man Cave. Henry finds a can of whipped cream. Schwoz takes it and when he sprays it on Ray, his shirt gets burned. Schwoz then takes the egg that he had mutated and gives it to Henry and tells him to put it in a bush in his backyard. Charlotte then finds a birthday cake in one of their packages. Henry sees something suspicious come out of the cake and he punches Schwoz so he can spray the cake with the can of whipped cream. The cake is destroyed. Schwoz's jaw is bleeding and Ray says the cake had no right to be destroyed. Ray looks at what Henry had seen and it turns out that it was a wireless video camera, which meant that someone was trying to spy on them. At a bike shop, it is revealed that the camera was from Dr. Minyak. The camera had been destroyed when Henry shot it with the bottle of whipped cream, but the camera was able to get Charlotte on video before it was destroyed. Dr. Minyak and his assistant, Nurse Cohort, believe that the girl worked for Captain Man and Kid Danger. At home, Piper finds out that she has less followers than Stacey Dauber and believes she had to post better media. Jasper finds the egg. Henry suggests that he put it back in the bush, but Jasper and Piper decide to record the egg hatching live to get Piper more followers.

Dr. Minyak and Nurse Cohort are posing as street magicians. They ask Charlotte to pick a card and they then place her in a trash can and lock it. They put her in the back of the truck and tell the spectators to close their eyes. When they do, Dr. Minyak and Nurse Cohort drive away. At the Man Cave, Ray and Schwoz make guacamole and they make Henry try them. Henry prefers Schwoz's, angering Ray. Ray wants to find Charlotte for a second opinion. At the bike shop, Dr. Minyak and Nurse Cohort trap Charlotte in a tank full of liquid. Dr. Minyak tells Charlotte that she would make her destroy Captain Man and Kid Danger. She says she will destroy them after she finishes homework. They musically brain warp her by getting a hip hop artist named Lil' Biggie and he raps about destroying Captain Man and Kid Danger. Dr. Minyak then amplifies Charlotte's physical strength and she becomes strong, evil, and powerful. Charlotte arrives in the Man Cave and kicks Ray. Ray is okay, and Henry tries to make Charlotte calm down, but she throws Henry to the side of the elevator. Henry then tricks Charlotte into walking toward him and into the elevator. Ray traps her in there but then, Charlotte breaks open the elevator door.

Charlotte hurts Ray's wrist and headbutts Henry. Ray then yells at Charlotte but she chases after him. Schwoz traps her into a tube and fills the tube with neural neutralizing particles so that she couldn't move. At home, Jasper and Piper are hatching the egg. Jake asks the egg what it would be, but the egg then shoots a tentacle up his nose. Schwoz finds out that her brain was musically brain warped. They say that they can play the song backwards and that will solve her brain. Henry raises the tube. At home, the egg begins to hatch, but the bird in the egg is a mutant and it jumps into Jasper's mouth. Piper drags Jasper in front of the camera. At the Man Cave, Charlotte is returned to normal and she tells Henry and Ray that Dr. Minyak had brain warped her in a bike shop. Henry and Ray transform into Captain Man and Kid Danger and go up the tubes. At the bike shop, they musically brain warp Dr. Minyak and Nurse Cohort and they rap about whacking themselves in the head 95 times. They then give Dr. Minyak and Nurse Cohort frying pans and they begin to hit themselves with the pans. Henry and Captain Man plan on erasing their memories. 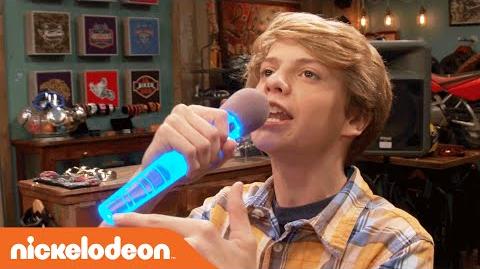