The Bucket Trap is the twenty-third episode of the first season of Henry Danger. It premiered on April 18, 2015 to an audience of 1.42 million viewers.

Henry and Captain Man return to the Man Cave where Charlotte is waiting for them. Henry and Ray explain that a helicopter pilot fell asleep on his controls and was driving the helicopter in circles when it ran out of gas and fell in the Jandy River. Kid Danger and Captain Man didn't do anything except take video of it going down. Henry notices that he has eleven texts from Jasper and Charlotte says she has nine. When Ray asks why, they explain that Jasper doesn't really have any other friends, so ever since they started working for Ray, they had to leave Jasper alone all the time. Charlotte feels bad for Jasper. The three of them start to eat gyros. While eating, Henry says that it isn't cool that he and Charlotte have to lie to Jasper and leave him alone when Ray needed them at work. Ray suggests that they sneak into Jasper's house and brain-wipe him so that he forgets both of them. Henry and Charlotte refuse. Henry suggests that they just tell Jasper that he's Kid Danger. Ray refuses because he is worried that Jasper would tell everyone that Henry was Kid Danger, and a bad guy would follow Henry to the Man Cave and blow it up. Charlotte decides that before they tell him, they should test him to see if he can keep a secret. Her plan entails that they make up a big secret and if Jasper can keep it for a week, they can tell Jasper Henry's Kid Danger. Ray gives his OK, but he says that the fake secret has to be that Henry and Charlotte are boyfriend and girlfriend.

A little kid tells Piper about a dog that won't stop barking at him. Piper then tells the kid to pretend to be the dog and she would pretend to be him and she tells the kid to act the way the dog does. The kid starts barking at Piper, so Piper throws the kid over her lap and starts spanking him. She says that he should face his fears, throw them over his lap, and spank them. She charges him $20 and the boy leaves. Jake sees this and asks if Piper was spanking kids for money. Piper explains that she is a life coach, and that she gave people good advice for money. Jake then asks Piper why he got so nervous in public bathrooms. Piper is about to tell him, but then sees that Jake was holding something in his hand. Jake explains that he was giving it to Kris so that if she went out at night and a bad person came, she could touch the device to the bad guy and he would be electrocuted. Henry and Charlotte invite Jasper to dinner. Before he arrives, they argue about who has to tell him the fake secret, but when Jasper shows up, they immediately stop arguing. They sit down and Henry tells Jasper that he and Charlotte were going to tell him something, but that he has to promise to keep it a secret. Jasper says that he can keep a secret, citing how he never told Charlotte that Henry was the one who killed her goldfish, Nemo. Upon hearing this, Charlotte becomes furious with Henry, who deflects the situation. Henry and Charlotte tell Jasper that he has to swear to keep their secret. Jasper replies that he swears on Nemo's grave and Henry tells Jasper to stop mentioning Nemo. He and Charlotte bicker once more about Nemo before, finally, Henry tells Jasper that he and Charlotte are boyfriend and girlfriend. Jasper can't believe this, so he grabs the bowl of peas and pours it all down his shirt in shock. He then asks them if they "kiss and stuff". They say that they do, causing Jasper to ask if he can see. Henry says that they can't kiss because Charlotte has a mouth sore. To escape, Henry and Charlotte claim that they are going to the mouth doctor. As they leave, Jasper tries to protest that no mouth doctors are open, but they are already gone. The next day, at Junk N' Stuff, Henry and Charlotte tell Ray what happened. Ray thinks Jasper will be blabbing it to every kid at their school, but then Jasper comes in. He says that the secret was getting hard to keep. Upon hearing this, Ray tells Henry and Charlotte to go to the "basement" and mop the walls and he would keep Jasper company. Henry and Charlotte go downstairs and Ray starts trying to get Jasper to tell the secret by saying that he had a feeling Henry and Charlotte were hiding something. Jasper says he can't help him. Ray tries to tempt Jasper by picking up a bucket and saying it was King Tut's golden bucket. It was worth $3,000 and Ray says he would sell it for $30. He then says he won't sell it to Jasper because he had a feeling that Jasper knew something and he wouldn't sell it to someone who kept secrets from him. Henry and Charlotte watch them from the camera in the Man Cave. Ray tells Jasper that all he had to do was tell him the secret and he'd be walking out of there with King Tut's golden bucket. Jasper tries to tell him another secret: his mom stole butter from restaurants. Then Ray says that he's not surprised. Jasper ends up yelling and running around the store and leaves. Jasper ends up coming to Piper begging for help.

Jasper tells Piper about his situation. Piper tells him to keep the secret and she tells Jasper to tell her the secret, since she was a life coach. Jasper is about to, but Piper shocks Jasper with the shock device. Piper then tells Jasper again to tell the secret so that she can help him more. Jasper is about to tell Piper the secret again, and she shocks him. Jasper then asks if he can borrow the device. He goes to Junk-N-Stuff and asks Henry and Charlotte if he could talk to their boss. Ray says he likes talking to Jasper and he tells Henry and Charlotte to go down and rotate the light bulbs, meaning to unscrew all the light bulbs and screw them back in again. Henry and Charlotte watch Ray and Jasper through the camera. Jasper gives Ray $60 for the bucket, but Ray still won't give it to him unless he told him the secret. Jasper gets the shock device and shocks himself with it. He tells Ray that he won't tell him the secret. Ray goes downstairs with the bucket. He gets a French fry from the snack machine and goes back upstairs. He tells Jasper that he'll sell the bucket to him for $10. He says that Henry and Charlotte just told him their secret. Jasper says, "Really? They told you they're boyfriend and girlfriend?!" Ray then points out that they didn't tell him, but Jasper just did. Ray starts making fun of Henry and Charlotte. At Henry's house, Henry and Charlotte tell Jasper that they broke up because Henry killed her goldfish and Charlotte had mouth sores, and they don't tell Jasper that Henry is Kid Danger. Jasper asks if he can see them kiss just once, to which they both respond, "No!" Unphased, he replies that they can't stop him from thinking about it. 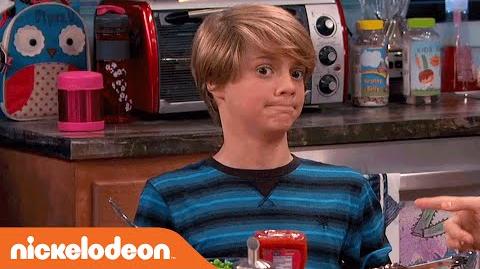