The Rock Box Dump is the third episode of the fourth season of Henry Danger. It premiered on November 11, 2017 to an audience of 1.52 million viewers.

A news camera and Evelyn Hall show up to the Swellview Park, where Captain Man and Kid Danger are fighting a bunch of thugs. Captain Man sees the news camera and goes up to them while Kid Danger fights the thugs on his own. Captain man recognizes Evelyn, and she is showing off her engagement ring, much to the annoyance of Captain Man. Evelyn recommends that he help Kid Danger, but Captain Man says that Kid Danger has hyper-motility, which Evelyn and reporters everywhere perceive to be some sort of disease. News reporters and social media begin to report about how Kid Danger's hyper-motility is a serious illness, and people on social media begin to believe that he is in serious danger.

Henry and Jasper go to Henry's house and find that Piper is counting a bunch of rocks. Henry asks why and she says that she is gonna do the Rock Box Drop, a movement that has been enacted to help raise awareness of hyper-motility. Everyone would make videos of themselves dropping a box full of rocks on their head. Henry tells Piper that hyper-motility isn't an illness, but Piper doesn't believe him. She was also raising money for the cause, and with every extra dollar donated, she would add an extra rock to the box. Henry tells her that if she dropped all those rocks on her head, she'd end up in the hospital. She tells him that she would just wear a hat and be fine. Henry goes to the Man Cave, and finds that Ray is about to throw up. Ray tells Henry that people had sent a bunch of care packages to the Man Cave, and he had eaten everything in them. Henry decides to make a livestream as Kid Danger, telling the public that he is not ill, but he slips on a grape and falls, hurting his ankle. His tongue then gets stung by a bee.

Piper is transferring the rocks to the park with the aid of her friends. A news report then goes on TV, telling the people of Swellview that Captain Man and Kid Danger are gonna be doing a livestream in a few seconds, and they would be broadcasting it. The livestream begins, and Kid Danger appears, but is limping and he can barely speak because of the sting. This makes everyone more sure that he is sick, and then, it is announced that Piper would be dumping 1524 rocks on her head in the park. Kid Danger and Captain Man go to stop her. She and her friends load the rocks into a forklift, and Piper tells Jasper to control it. Kid Danger and Captain Man show up, with Kid Danger having cured his bee sting. He demonstrates his hyper-motility by ripping off a man's wig and putting it back on with fast speed. He tells them about how it wasn't a disease, and to never drop rocks on their heads. Jasper then accidentally drops the 1500 rocks on Captain Man's head, but he survives. Henry, Ray, Charlotte, and Jasper begin to brainstorm names for Henry's superpower. Charlotte decides that they just call it "Super Fast Reflexes". 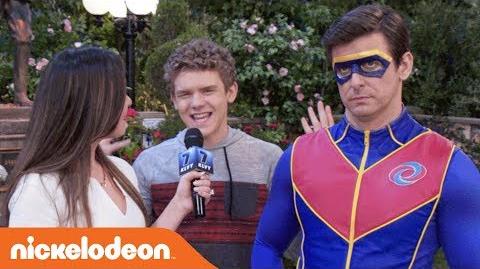 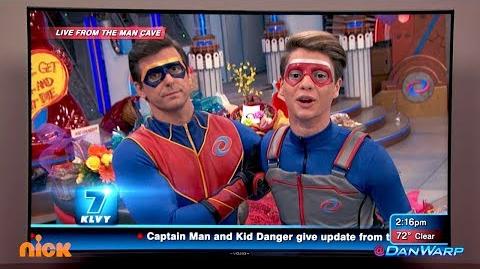