The Trouble With Frittles is the fifth episode of the third season of Henry Danger. It premiered on November 5, 2016 to an audience of 1.60 million viewers.

Jasper brings Charlotte to the janitor's closet. He tells her about possible code names for when he wanted to talk about Captain Man, Kid Danger, and the Man Cave. Charlotte leaves the closet and Ms. Shapen comes in. She tells everyone that two new flavors of Frittle chips were coming out called Ragin' Red Rhubarb and Bodacious Blue Bacon. Two guys arrive and start launching cans of Frittle chips to the students. They all watch a report on the Swellview news saying the Frittle Corporation was having a contest where people vote for which flavor they wanted to become a new flavor. Jasper decides to vote for the red chips and Henry decides to vote for the blue chips. Charlotte doesn't care about the contest, but Jasper becomes disappointed about Henry's decision.

Piper calls a meeting of the Man Fans at her house. They are trying to decide whether to vote for the red chips or the blue chips. Piper tells them that they would only vote for the flavor chips that Captain Man and Kid Danger chose. In the Man Cave, Schwoz begins to fill up the Auto Snacker with oats for his sister. Ray likes the red chips, and Schwoz thinks the blue chips are better. Ray tells Schwoz to vote for the red chips, but Schwoz disagrees. This results in Schwoz jumping on Ray and trying to tackle him. At the Junk-N-Stuff counter, Jasper is giving away free cans of red Frittle chips, telling customers to vote red. Henry sees this and he tells Jasper he can't do this. Jasper says that Ray wants the red chips to win, and Henry goes downstairs. Henry and Charlotte find Schwoz stuck in a large bucket of oats. They let him out and Schwoz says Ray put him in there. Ray says he did it because Schwoz was commending blue chips. Henry tells Ray that the blue chips were great, and the red chips weren't as good. Ray is angered at this. Charlotte tells them that the flavor wouldn't change the world. They get an emergency alert from a guy who was trapped under a boulder. Ray is about to go save him, but when he sees the guy eat a blue chip, he tells him to save himself. Henry then says that he won't help anyone voting red. Schwoz then tells Henry and Ray that someone stole a bunch of cases of red Frittle chips. Henry goes to help the guy under the boulder and Ray goes to bring back the cases. They transform, but Ray finds himself in a wedding dress instead of his Captain Man costume. Schwoz laughs, saying it was for revenge.

When Henry saves the guy, he goes to the Frittle corporation. Jack Frittleman, the CEO of the corporation, says that two cases of chips were missing. The Man Fans arrive at the place and they ask Captain Man and Kid Danger what chip they are voting for. They don't know how to respond, and Henry is about to say that they don't get involved in snack politics, but Captain Man tells them to vote red. Henry then gets a launch machine and shoots Captain Man with a can of blue Frittle chips. Captain Man shoots him with a can of red chips and they start firing the machines at each other, but Henry accidentally launches cans at machinery, causing it to malfunction. The workers tell them to evacuate and the entire building explodes. The red vs. blue contest is canceled and it is said it will take four years to rebuild it. Ray then says that he was able to get two cases of red chips for himself when he was recovering the cases. However, they discover that Schwoz's sister, Winnie, had eaten all of the chips. 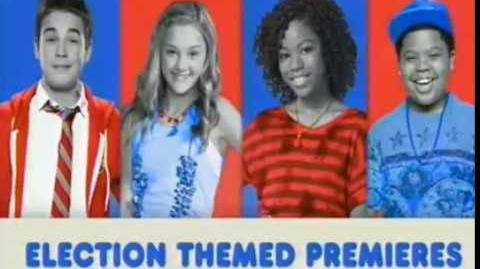 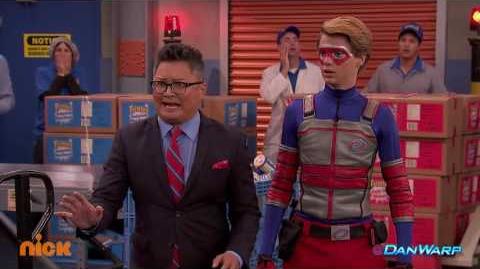